If I had fireworks, I’d light em! Two of my favorite things happening right now… when people who reject my God, His Word, His Son, His Spirit and His authority— try to co-opt that which they routinely mock, to give validity and credibility to sophomoric ideas… and in some way pressure Christians, who they routinely loathe, into agreement. You got me, bro. Biden is just like Jesus. Thank you for pointing that out. 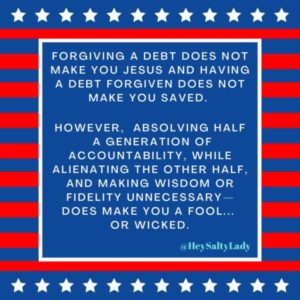 Favorite thing #2… when the party of equity, justice, and “the people” do things that absolutely are not equitable, just, or for the people… especially if you actually are marginalized or in a minority group— and no one in their party, or their party planners in the media, even question it.

Do you know how the statistics break down on student loan debt by ethnicity? (Hint… it’s not really the underprivileged getting this privileged forgiveness.) Do you know which degrees are least employable over the last 20 years… would you be surprised to know how many are invented, liberal pseudo studies? And the educational institutions taking advantage of the sweet (18 yr old) children… wanna guess how many are liberal institutions of learning? Or under what political leadership did government begin pouring money into those institutions and draining control out the other end? (Hint #2… I can count actual conservative universities on my hands while holding the diploma I’m still paying off.)

Whaaaa?! You mean the policies you instituted in the institutions you largely control turned out badly? You don’t say.

More on this later. But for now… let freedom ring, man… cause common sense sure isn’t. What do you expect from the 2+2=5 crowd? If only we taught math instead of just how math is racist. #merica

Posted in Conservative and tagged conservative
← Boomers, Groomers, and a Little Perspective on Purity CultureRise, Shine, and Give God the Glory, Glory! →