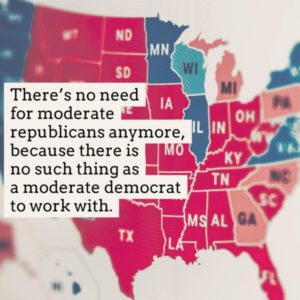 Here’s the conversation we should be but aren’t having as we prepare for elections:

The Democratic Party is, depending on the gracious generosity of the observer, teetering on the brink or it has dived headlong off the cliff of “Can Safely or Reasonably Govern.”

The crazy has quieted because they’ve been in power for 2 years and busy implementing.

But remember, this is the party that has normalized and heartily advocated ending the electoral college, packing the courts, adding states, rioting and mayhem in response to absolutely legal elections, appointments, and judicial rulings they dislike.

Defund the police? That wasn’t an off the cuff remark by the fringe, it was a platform. They ran on it. And we are living in its results. How are you feeling about crime?

CRT/Gender/Queer theory? Again, once radical ideologies now adopted by an entire party. How are you feeling about our education system? Have you seen Libs of TikTok? We are well past just assuming everything’s fine.

Our current economic crisis? We are so naive. It’s not their policies failing, it’s their policies succeeding. Destabilize. Redistribute. Force dependence. Inflation is not the unfortunate byproduct—it’s the intended fruit. How are you feeling about the economy?

How are you feeling about the Democratic party’s response to immigration and border security? We still have “cages,” they still have people in them. The only thing different now is the number in coffins, from trafficking and fentanyl.

There’s no need for moderate republicans anymore, because there is no such thing as a moderate democrat to work with. We have gone to extremes, one side in radicalism and the other side in response to radicalism. Who are they gonna run—Hillary? Biden or Kamala? Mayor Pete who’s fumbled transportation? Tring to pass off Biden, Harris as moderate in 2020 was laughable… and yet it worked! Because people don’t really care if it’s true or not. Who’s your moderate this go round? Newsom? Let me just roll my eyes like energy brown outs in California.

If there are any Democrats left in the Radical party, you need to purge your party. If not, you cannot be trusted to be in power. Not when you have stated, as though it’s a reasonable idea, the complete overthrowing of our government institutions.

There’s a larger quieter group than either party realizes who understood 2020 rightly and are watching to see if we have free and fair elections, ever again.

Surely, you see this.

Posted in Conservative and tagged conservative
← Socialism is Great… on Paper!Crooks, Crowns, and the Libbish Empire →