Crooks, Crowns, and the Libbish Empire

This week was peak royal… self-unaware, self-absorbed, a smidge snobby (an understatement) and floating gracefully above the realities for the rest of us peons.

And that’s stateside royals, not even the ones with actual crowns across the pond. When you too wear a crown, not even the Queen of England is worthy of your respect.

This was proved by libs this week banging the funeral drums to remind us how unfair life still is for them as they speak from the freest nation, and positions of tenured, protected, and unmerited authority and superiority.

Actual comments from our elite academia and journalistas: “Hope her final hours are filled with excruciating pain…”

“For 96 years, that colonizer has been sucking up the earth’s resources…”

“Oppressors should expect the oppressed to rejoice over their death…” said by an American. “She represents an empire that’s committed mass vi0lence and atrocities…” at least he acknowledges this minor detail— not her personally, just the country she represents. Which is super fun because with that mindset, how should the world perceive him… being an American… which is obviously a barbaric landfill?

No lie, from the Diversity, Equity, and Inclusion professor… “that wretched woman and her b|oodthirsty throne have ****** my family for generations… supervised a government that sponsored genocide… may she die in agony…”

Knowing how these bastions of grace view America, what will be the appropriate response when Pelosi, Biden or Obi depart? Knowing about the drones? The cash on planes to terrorists? They “served” our thieving colonizing nation for decades… lifetimes even. How will tribute be paid then for the empire they oversaw?

The US aristocracy reveling in the death of the monarchy, while ignoring the crooks, crowns, and Libbish Empire on their own island? Now that’s rich, priceless gems and stolen stones indeed (if you catch my drift.)

Look around. WE HAVE A KING. We even have the shadowy advisors pulling the strings. We have unmerited heirs peddling gadawful wares and ridiculous fingerpaint scrawlings. While everyone calls it “pretty” and pretends it’s not bribes or larceny. Only a prince could fare so well.

We have warring political dynasties… making unholy alliances. My word Hilly… go away already and take “Wyo-why” Liz with you.

We have loyal insiders placed at university keeping eyes and ears on the indoctrination of the budding minds.

In our Stars and Stripes kingdom, we too have a ruling class, and a peasant class that’s supposed to be grateful for the scraps and crumbs. From “let them eat cake” to “quit complaining and buy electric cars.” #progress Does no one see the utter hypocrisy of preaching “This is the worst nation, but also you’re doing amazingly well here and should be grateful!” 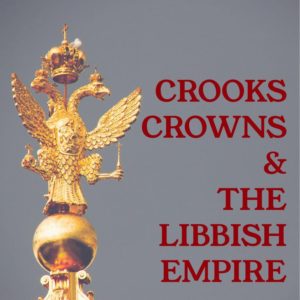 We have the corrupted Sheriff of Notgiveadham putting dissidents in irons and tower—while crooks have unlimited and illegal power. Where’s Robin Hood and Little John when you need them?

Talk about theocracy— we have our green religion and our grievance religion, with absolutely no God or good among them… but fraudulent friars abound, selling righteousness for phony repentance.

We aren’t burning the writers of secret pamphlets or sacred texts, but we sure as shire are still rewriting religion to make our sin holy. And our royals will gladly silence with bird and tweet to do it.

The honest among the haters could admit that Queen Elizabeth wasn’t directly responsible for any blight of the Brits. But our royals?? Oh nay, nay. Ours are personally conceiving, coordinating, and controlling, the collapse of our kingdom. While their paid jesters and molesters charm our children.

Our royal court cannot be questioned, cannot be wrong, and if you think they are it’s because you’re uneducated and unrefined (swine.) They steal crowns and secure thrones and only pass power between them.

But in all good or bad kingdoms, nothing lasts forever. The people get hungry enough, mad enough when they’ve had enough, or finally tired of bowing. Out comes the plaid and paint, for those wanting to be left alone—but ain’t, and somebody remembers they can take our lives, but never our freedom. Not without a heck of a fight anyway.

Keep calm and carry on, ya filthy beggars.

Give it a minute… that’s layered and just hysterically funny if I may so. CARRY on? I die.

Pray thee someone gets the #.

Subscribe here at HSL, your local source of inflammation and inspiration… and occasional palace intrigue.